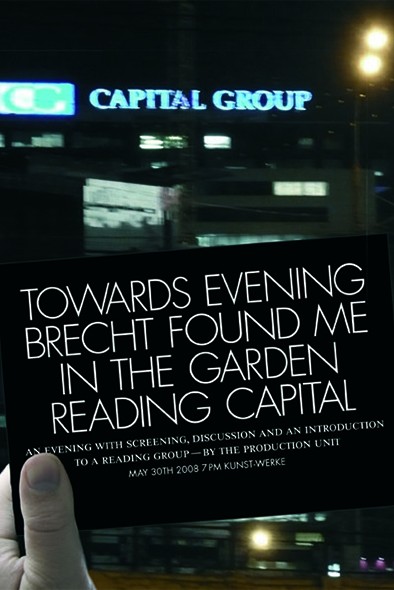 Toward Evening Brecht Found Me In the Garden Reading Capital
A reading group of Das Kapital at 5th Berlin Biennale, Kunst-Werke, Berlin, Germany 2008

For several years, the geographer David Harvey has offered a seminar on Marx’s Capital at the Graduate Center in New York. These lectures have now been documented by a group of anthropologists in order to be made available to the public. With Harvey’s lectures as a starting point, the Production Unit used the framework of the 5th Berlin Biennial to launch a reading group of Capital in Berlin. Our hope was to generate a broad discussion on issues of capital in relation to a critical practice today, as well as to generate the possibility for a new collective to be formed. Philipp Kleinmichel, PhD candidate at the philosophy department at University of Arts and Design Karlsruhe/ZKM, were the discussion leader for the reading group that held meetings every Monday for 14 weeks during the summer at the Montgomery Gallery in Berlin.

Back to Production Unit