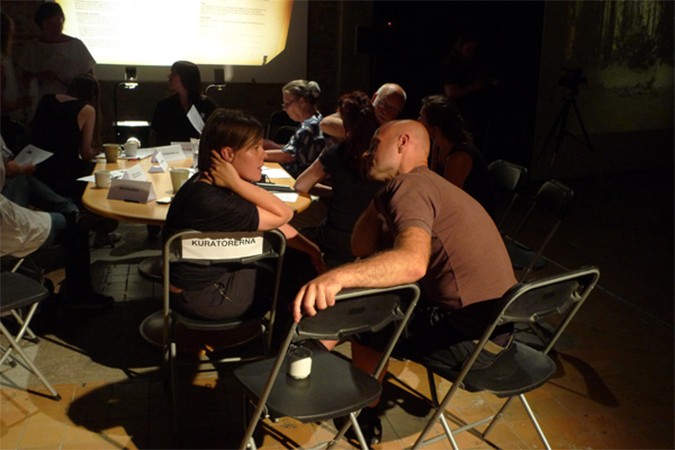 A Space On The Side Of The Road
Exhibition at Röda Sten Konsthall in Göteborg, June 13th to August 16th 2009.
Curated by Henrik Andersson and Kajsa Dahlberg

The concept of Allemansrätt* is one of the strongest aesthetic concepts produced by Swedish politics in the twenties century. This concept constitutes a construction of a national identity and a self-image that alludes to an atavistic relation to nature, as well as a tradition of organizing society based on the concept of equality. However, in order to function a legal right always invokes an ideological framework and hence the question arise: who is, and how does one become, an "all man"? We can see how this law encapsulates the liberalist tradition of thought were man has advanced from natural to positive law. But however paradoxical, the right to common land is resting on two types of interacting administrations: the state on one hand, and the right to private property on the other. Perhaps the law of Allemansrätt should be see as an architectonical opus through which legal instruments have been able to realize the modern state and its civil rights. But despite the fact that this somewhat expropriating law is an important social project that has increased the quality of life for many, it nevertheless embody a form of violence. Allemansrätten presuppose settled residents who use nature as a sort of "picture", something which in turn has influenced the way Swedish travelers encounter non-Europeans in the "south" and the sami-population in the "north". This law comprise classical conflicts such as that of individual/collective, nature/culture, territory/identity as well as touch upon notions of law, right and freedom. If we imagine that our access to space is being restricted we should remember that our right was based on the fact that we were not there from the beginning. Today the law is being revised and civil rights are once again contrasted against private interests. What importance does this law play in today's society and how can it be used for understanding the relation of the individual to that of the collective? In correspondence with several artistic practices, using the concept of Allemansrätt as a point of departure, our aim is to illuminate the iconography that is constructed through our conception of nature, as well as to deconstruct the demarcation agreement that might be national, territorial, social and/or political.

* Allemansrätten (All men's right) is translated in English to "Freedom to Roam" or "Legal Right of Access to Private Land". According to the Swedish national encyclopedia the law implies the right for all to spend time in nature and to move through woods and fields, pick wild flowers, berries and mushrooms.