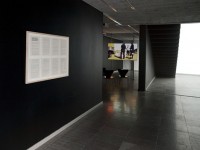 Every summer the island of Femø in Denmark is transformed into a camp, the oldest still existing women’s camp in the world. Femø Women’s camp was the departure point for the Scandinavian Feminist Movement when it first started almost 40 years ago and it is still run and maintained by activists.

Presented as a loop, Femø Women’s Camp 2008: Film and Agreement depicts the last week of summer and the process of packing down the camp. Alongside the production of the video, negotiations were made with those involved. The negotiations resulted in a contract that function as a sort of manuscripts for the film as well as an agreement between those who participated.